Posted at 13:19h in News, Techno News by Isalys Info

Researchers have developed a remote-controlled pollinator using a miniature drone equipped with a sticky gel, in what could be a glimpse of the future as more and more bee species become endangered. 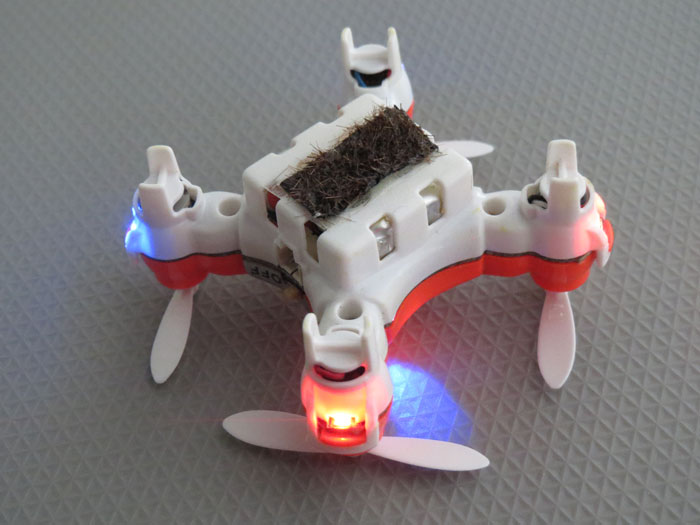 With extinction pressures on bees and the world’s other natural pollinators estimated to threaten up to US$577 billion worth of global food production annually, artificial pollinators could be one way of taking the burden off insects and other animals that play a pivotal role in agriculture.

But while autonomous bee drones could be an important part of food production in the future, researchers from the National Institute of Advanced Industrial Science and Technology in Japan only stumbled upon their artificial pollinator concept by chance.

A decade ago, chemist Eijiro Miyako was conducting research on ionic liquids – salts in a liquid state – to see if he could find any solvents that might make good electrical conductors.

He ended up developing a gel that was as sticky as hair wax, but no good for conductivity. Considering the liquid a failure, he abandoned it, placing the gel in a storage cabinet in an uncapped bottle.

Several years later, Miyako rediscovered the substance, and was amazed to find that despite being lidless for so long, it hadn’t altered or evaporated.

“This project is the result of serendipity,” says Miyako. “We were surprised that after eight years, the ionic gel didn’t degrade and was still so viscous. Conventional gels are mainly made of water and can’t be used for a long time, so we decided to use this material for research.”

When dropped on the floor, the researchers noticed that the gel’s stickiness helped it pick up dust easily, and it occurred to them that it might make a good material for collecting pollen grains.

When flowering plants reproduce, their male organs (stamens) produce pollen that fertilises their female organs (pistils), but for cross-pollination between plants to occur, you need something sticky to transport the grains from one plant to another.

This is where bees and other insects come in, collecting the small grains of pollen that get stuck to their bodies, and ferrying them back and forth between plants during feeding.

But while bees are naturally good at this, anybody or anything could do this manual transfer – which is one of the reasons why people actually perform the task by hand in rural China, in response to declining bee numbers.

Of course, there has to be a more efficient way, which is why scientists are looking into technological solutions.

To test their gel, Miyako’s team put droplets of the liquid on ants and placed them in a box of tulips. The material helped the ants pick up more pollen on their bodies than untreated insects, which showed the gel could be a good adhesive.

All they needed now was something that could fly from flower to flower, so they decided to use miniature four-propeller drones, which sell at retail for around $100.

Since the drone’s plastic body would be too smooth to hold onto significant amounts of pollen grains by itself, the team affixed a small brush made of horsehair to the underside of the unit, and immersed the brush in the gel.

In testing with their makeshift bee substitute, the remote-controlled drone was able to successfully pollinate Japanese lilies (Lilium japonicum) by ferrying the tiny grains from one plant to another – although manually piloting the miniature pollen taxi takes a little while to get used to.

“A certain amount of practice with remote control of the artificial pollinator is necessary,” the researchers explain in their paper.

Of course, needing human operators to individually control artificial pollinator drones won’t be any kind of permanent solution to the bee decline problem.

But the researchers say that future versions of the system could become more energy efficient and offer better manoeuvrability – in addition to incorporating artificial intelligence and GPS systems, so that they could navigate and pollinate crops autonomously.

It sounds like science fiction – and it actually is, with exactly this kind of system appearing in the TV show Black Mirror.

But if that kind of technology becomes possible, pollinator drones in the future could help carry the burden of declining bee populations, if human efforts to stem the ongoing decline don’t pan out.

That said, it’d take an awful lot of drones to pick up the shortfall.

“If you think about the almond industry… you have orchards that stretch for kilometres and each individual tree can support 50,000 flowers,” researcher Saul Cunningham from the Australian National University, who wasn’t involved with the study, told New Scientist.

“So the scale on which you would have to operate your robotic pollinators is mind-boggling.”

That may be the case, but the researchers behind the artificial pollinator are undaunted.

While they don’t think their creation will ever replace natural pollination, unless we can turn bee extinction pressures around, we have to start somewhere.

“We hope this will help to counter the problem of bee declines,” says Miyako.

“But importantly, bees and drones should be used together.”

The findings are reported in Chem.

This article originaly appeared in : http://www.sciencealert.com